The Leicester Tigers will be meeting the Northampton Saints on Saturday at Welford Road, in the Aviva Premiership derby and the game will see George Worth continue at full back position for Leicester Tigers. 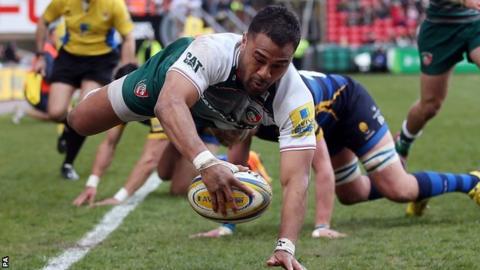 Just last week, Worth had started against Bristol, having stepped in to replace Mathew Tait who was fit due to a broken jaw, and a TelusaVeainu who was away on international duty at the time for Tonga.

After picking up a head injury in the international clash, Veainu would be unavailable for the match against Northampton Saints and could stay on the sidelines for quite a lengthy period.

Richard Cockerill, director of Rugby for Leicester Tigers, speaking about Veainu had said,

“The advice is that Telusa will have a period of stand down until the symptoms have gone,”
“With Mat Tait out it isn’t ideal but it is an opportunity for others to step up,”

“George had a really solid game at Bristol. He was great under the high ball and good defensively.

“He is a young lad who still has a lot to learn. But this is another opportunity to see where he is at in a big local derby in front of 25,000, which brings different pressures.” He added.

After sustaining a head knock in the game against Harlequins a few days ago, Tom Croft would be making a return to the squad. Croft had a bout of sickness last weekend but according to Cockerill, he was back in training.